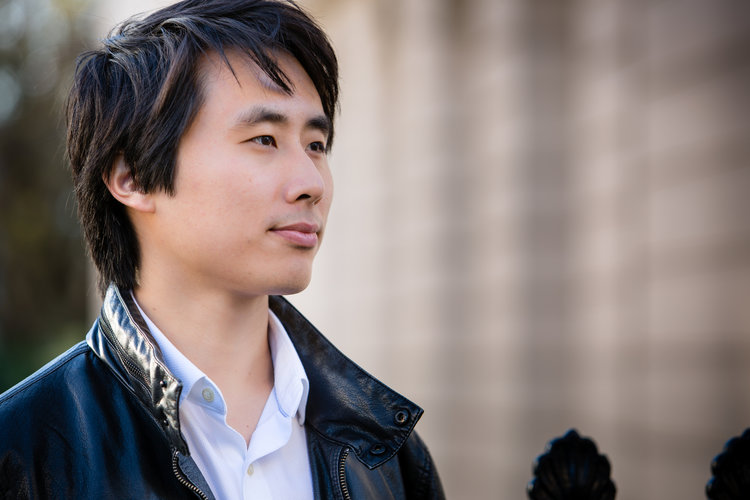 When I wasn’t old enough to remember anything (maybe I was 3 years old), my parents took me to this neighborhood yard sale where there was this tiny yellow electric piano. It had about two and a half octaves and made all sorts of funny sounds. Apparently, I liked it so much that I tried to steal it.

After my brief stint in a life of crime, I played lots of things by ear on this little keyboard. Realizing how much I enjoyed this, I started piano lessons around the age of five, and immediately took to it.

But though I started piano early in my life, I don’t exactly know when I decided to pursue a career in music. My parents were insistent that I go through as normal a childhood as possible, and when it came time to choose where to do my undergraduate studies, I was drawn to the world of academia. For that reason, I chose not to go to a conservatory, and I majored in economics. At the same time, deep down I knew that I couldn’t imagine a life in anything other than music; sometimes I genuinely felt very unhappy not being able to give my full attention to the piano. It’s taken a long process for me to come to my own terms with music, and because of this journey I feel all the more grateful for what I have now.

The formative teachers I had were Carole Kriewaldt, Scott Beard, Faye Bonner, and Carolyn Booth. They stoked a real love for music, which I find myself coming back to every day. I also studied with Susan Starr, who I found incredibly inspiring and joyful to work with.

When I turned 18, I studied with Meng-Chieh Liu for eight years, both before and during my time at Curtis. By far, he has been the most lasting influence on my artistry and pianism. We would have these multiple-hour lessons where we would start covering Brahms Third Sonata and somehow later digress into very intense self-reflection, borderlining on therapy – “Your playing is your diary,” he used to tell me. At Curtis I also studied with Jonathan Biss, who has been – and still is – a real mentor to me, and I frequently look to his artistry as an inspiring example.

I’m currently working with Joanna MacGregor and Christopher Elton. I’m incredibly lucky to have the opportunity to see two demanding musicians who are also so kind and nurturing, while demanding nothing but the highest degree of artistry.

I always feel a tension between my personal life as an artist (practicing, performing, studying, etc) and the outside world (business, gigs, demands by family and friends, etc).

Negotiating this balance is always a challenge, and to not let unhelpful distractions from the outside affect what happens on the inside takes real mental strength and endurance.

My absolute favorite composers to play are Mozart, Schumann, and Messiaen. I also enjoy playing contemporary music, particularly creating new work with colleagues – it’s a real chance to contribute to the repertory and deserves to be played just as much as the warhorses. I’m just now working with composer Joseph Howard in creating a new piano concertino. He’ll come in with a fragment and ask me, “does this work?” and we’ll sit around and play with it and see what we can do with it. (His piece, Drift, will be premiered at the Royal Academy of Music on May 3rd.)

I want to always give audiences an experience that they’ve never had before. I believe one should be curious about new music, new connections, and new interpretive ideas; there is so much good music out there that is never played, and so many avenues of interpretation that haven’t yet been explored.

When I’m planning a recital, it’s important to me that I make some sort of underlying connection between pieces – a “spine” tying all the works together. While this could be a thematic connection (e.g. pieces by Spanish composers), I’m more interested in something musically that connects the works. For instance, in a recent program I put together some preludes by Messiaen, a prelude by Dutilleux, Elliott Carter’s Caténaires, and Ravel’s Gaspard de la nuit for one half. There was the obvious underlying theme of French/French-inspired music, but there was also something interesting in how each composer used color and pianistic shading to evoke scenes and visceral sensations. A little arrangement can really light a fire in both the listener’s and interpreter’s imagination!

I am also about to perform in this amazing concert series called Listenpony, which programmes a mixture of old and new music in relaxed venues. I have three new pieces commissioned for me by composers Freya Waley-Cohen, Daniel Fardon, and William Marsey, which I’ve paired with three works from the existing repertoire (Etudes by Liszt and Rachmaninov, plus a short Beethoven Sonata) for Listenpony’s first tour, at Manchester’s Anthony Burgess Foundation, Birmingham’s Centrala Space, and London’s Playground Theatre where the concert will be performed amongst sculptor Josie Spencer’s latest exhibition.

I prefer smaller, intimate venues, where I can feel everyone’s presence. For this reason, Field Concert Hall at Curtis is my favorite place to play and listen. It’s a weird shape, kind of rectangular in the wrong way, and the acoustic is strangely unforgiving… but I’ll never forget those concerts that I played and heard there. I always got a real sense of tradition when I walked onstage – I shared the same stage as my teachers, and my teachers’ teachers, going all the way back to some real legends.

I also really love Ozawa Hall at Tanglewood. There is nothing as seductive as a cool summer evening under the stars at Ozawa Hall. Sometimes when you play something like Messiaen, the birds even start singing back.

That’s a very difficult question; there are so many incredible artists. When I was a teenager, four pianistic giants floored me when I first discovered them: Martha Argerich, Vladimir Horowitz, Glenn Gould, Grigory Sokolov. Then, when I went to Curtis, my good friend insisted that I listen to Alfred Cortot, which moved me in such a different way. It got me hooked on the pianism of another age: Benno Moiseiwitsch, Ignaz Sofronitsky, Ignaz Friedman, Josef Hofmann… Those recordings are ravishing and sound so fresh and inventive despite how old they are. They really force you to confront the interpretive assumptions we make in the modern age!

I’ve also had the pleasure to work with Pierre-Laurent Aimard a few times. He’s got a bulletproof command of the instrument, but he also plays with such heartfelt musicianship and sensibility. I always find him so compelling, especially with Messiaen.

Playing Messiaen’s Turangalîla-Symphonie on a beautiful summer evening at Tanglewood two years ago, at the last concert of the Festival of Contemporary Music. I love that the piano and the ondes martenot soloists are within the texture of the orchestration, and you get the sense of everyone working together to create this massive, strange dance of eternal love and ecstasy. I felt like every single cell of mine was vibrating with music that evening. That was the first time I had ever played that piece, and I still get chills when I think about it.

External success in our line of work is ephemeral at best, because there is always more to do: another work to master, another concert to play, another corner in the score left unturned. There are so few reliable markers of validation in art, so turning outside in search of success usually leaves people feeling bitter and confused.

It’s probably better to focus on different things. Did I prepare thoroughly? Was my playing authentic? Did that program work organically? What could I have done differently (probably most important!)? True success is an attitude, not a destination.

It’s not about you – it was never about you!

No matter how tired, hungry, depressed, or awful you feel… when you walk on stage, it’s all for the listener.

In practicing, if your goal is to just get by, or to just play the right notes, or to do what is correct… you are doing your future audience a huge disservice. Every note, every phrase, every moment counts!

As a wise friend once told me: “Every performance costs something, even if you’re paid nothing…”

It’s composed of many different scenes, which include (but are not limited to): A dry autumn morning in a local coffee shop, where I’m reading a good book next to a fresh coffee; a new score that I’ve been itching to play, or an old piece that I’m reacquainting myself with; cooking a nice meal; ample time for practice, friends, family, and myself; going to – and giving – good concerts; and last (but not least), spending all day swaddled in sweatpants, fuzzy socks, and a hoodie.

3 May. Manson Ensemble with Jonathan Berman, Duke’s Hall at RAM: World premiere of Joseph Howard’s Drift along with works by Harrison Birtwistle

Hailed by the Boston Music Intelligencer as a “heroic piano soloist” with “stunning virtuosity”, Chinese-American pianist George X. Fu has performed as a soloist with orchestras such as the National Symphony Orchestra, Baltimore Symphony Orchestra, North Carolina Symphony, Tanglewood Music Center Orchestra, Curtis Symphony Orchestra, and Bach Society Orchestra of Harvard University. He has performed at the Kennedy Center, Carnegie Hall, Seiji Ozawa Hall at Tanglewood, the Lied Center at the University of Kansas, the Japanese Embassy in London and the German Embassy in Washington D.C.. His live performances and interviews have been featured on several public television and radio broadcasts throughout the United States, such as On Stage At

George frequently collaborates with composers in premiering new works, and also composes his own works. He recently commissioned piano etudes by young composers Matthew Aucoin and Andrew Hsu for a lecture-recital on technique at the Curtis Institute of Music. He also premiered and recorded a set of piano etudes by Dmitri Tymoczko at Princeton University.

A native of Frederick, Maryland, George began piano studies at the age of 5. He earned a bachelor’s degree from Harvard College and then studied at the Curtis Institute of Music under Jonathan Biss and Meng-Chieh Liu. He currently studies with Christopher Elton and Joanna MacGregor at the Royal Academy of Music in London, where his studies are generously supported by the Tobias Matthay and Skelton Scholarships.