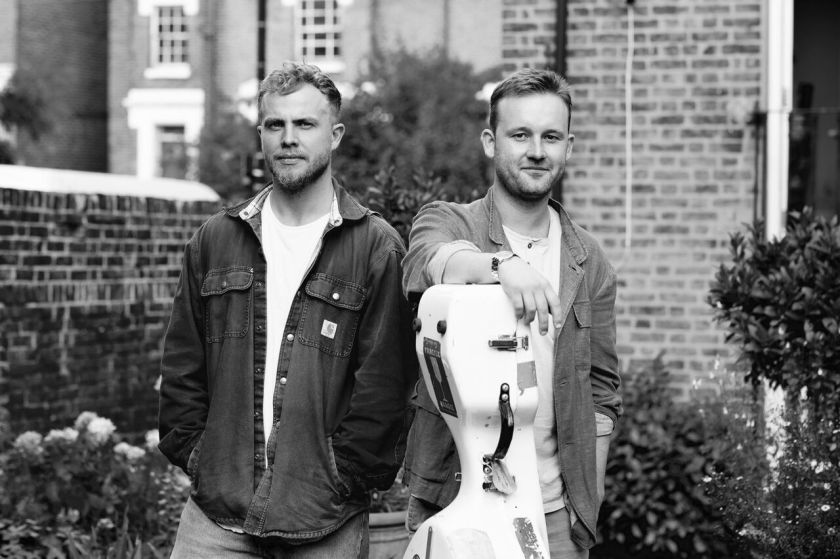 Who or what inspired you to take up the cello and pursue a career in music?

CA: I started the cello a little before I was five years old. My grandmother, a violinist, thought I had a cello player’s hands! My mum is also a cellist and most of my family are musicians so I was surrounded by music from a very early age.

CA:  I would say composers such as William Lawes, Beethoven, Webern and Giacinto Scelsi must be up there but there are so many more whose music I’ve been obsessed with. I’m lucky enough to spend a lot of my time working in the same room as some amazing orchestral players and their performances are a constant source of inspiration. Of course I will also always be indebted to my composition teacher, Jonathan Cole, and cello teacher, Oleg Kogan.

BG: There have been endless technical challenges and steep learning curves over the years but I think the hardest thing is sticking it out when times are hard. Being a musician is never an easy ride; it’s hugely competitive and unpredictable. There are also the mental health aspects which can get pretty tough as composing is broadly isolating. It’s important not to hermit oneself, be sociable and collaborate as much as possible. Technical challenges are the fun bits, I think all musicians enjoy being thrown in at the deep end!

CA: Well it almost always tends to be the last thing I’ve done, which I guess is good, so I’ll have to go with this album – Addelam. We also performed a live version of the album with my cello trio Tre Voci, Kit Downes on organ and the Southbank Gamelan Players at Union Chapel last year which I massively enjoyed.

CA: The easy ones! It’s really hard to say if there’s anything specific. I regularly shift from cello trio arrangements of John Dunstable (c.1400) to huge orchestral works to brand new contemporary pieces and simply try to play whatever is in front of me as well as I can.

CA: There are always so many programmes that I want to put together so it’s just question of which projects can become a reality. It’s a juggling act to balance it all and as yet I don’t think I would qualify to join the circus!

CA: Union Chapel is brilliant in every way and has a great bar to top it off! The Albert Hall in the Proms has a great buzz but the best acoustic I’ve played in is the Musikverein, Vienna.

BG: This list changes on an almost daily basis! I love discovering new music so I’m constantly finding new favourites (fickle, I know). For the purposes of this, though, some composers who have influenced me greatly are Karol Szymanowski, Andrzej Panufnik, Harry Partch, John Cage, Bent Sorensen and Pelle Gudmundsen-Holmgreen.

CA: I could never narrow it down to one but it’s probably got to be one of the concerts that I’ve organised myself or as part of a group. With Tre Voci, we performed some of the Addelam material with the incredible Iranian hand-drummer Mohammad Reza Mortazavi alongside vocals, electronics and projections at ICA in late 2017. It was very ambitious to try to blend it all but the adrenaline after something like that goes to plan is unbeatable.

BG: Anyone who is able to do the thing they love and make a living from it is absolutely nailing it in my view, especially when it’s something fairly esoteric! I’m constantly grateful that I get to spend my life doing the thing that I’m passionate about with all these amazingly talented and like-minded people.

BG: I work with a lot of young artists and musicians who are trying to find their voice and choose their path, and I always say the same thing which is something along the lines of “you do you”. It’s a bit hackneyed but the sentiment behind it is hugely important. Being honest as an artist leads to the best art, though it’s not always the easiest path. Another thing – have fun with it. This is something I forget from time to time. Music is fun, enjoy it.

Addelam came about after a year of exploring the extraordinary natural beauty in the area of Deal, East Kent and improvising with a variety of instruments through the stormy afternoons, golden late evenings or fire-filled nights. ‘Addelam’ is how the town and surrounding area appears in the Domesday Book from 1085. Their music comes from the huge expanses of sunlit sand and the famous white cliffs, night-time on the quiet pebble beach and the fireplace in the small old house at the North End. Recorded in a number of locations, with field recordings, site-specific sounds and instrumental improvisations throughout, this debut album gathers together an experience of ecological awe alongside a meditative and homespun existence.

Listen to Egress from the album

Beni Giles is a London-based composer and producer who works with a variety of artists across genres. His own works have been performed by the likes of Vickers Bovey Duo, Tre Voci cello ensemble, Kit Downes, and CHROMA ensemble, amongst others. He is a longstanding collaborator with Nonclassical, through which he has received performances with orchestras and ensembles across Europe and contributed to several releases.