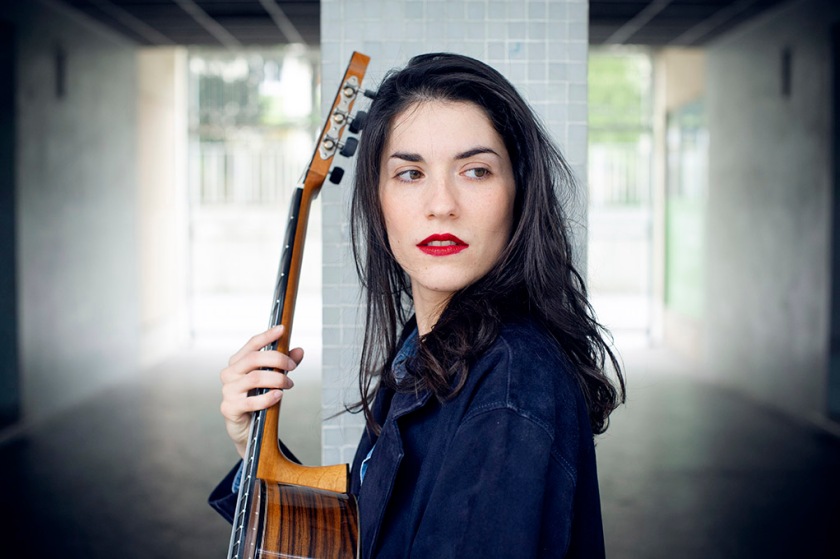 I hesitated for a long time during my studies between an academic and an artistic path. After the baccalaureate, I spent two years preparing for the competitive entrance exams of the Grandes Écoles and then two years at HEC Paris, a business school. I had so much work that I was about to give up the guitar. That’s when I met Jérémy Jouve, a great classical guitarist, who was my teacher and mentor during all these years. Thanks to his advice, my playing became more professional and I gained confidence. I also met many fascinating students and teachers at the Conservatoire, all of whom shared a love of music. This musical environment touched me enormously, and since I was not happy in business school, I decided to put these studies aside and devote myself entirely to the guitar.

It was without a doubt the recording of my first album “Hommage à Debussy“. This album is the result of a long process that started five years ago when I posted my first video on YouTube – an arrangement of Clair de Lune for guitar. Since then, I haven’t stopped thinking about Debussy’s music and how to transcribe it for guitar. Indeed, Debussy never wrote for guitar. His works for piano are marvellous but very complex; pianists can use their ten fingers to interpret them, we guitarists can only use the four fingers of the left hand! So we had to find solutions: some works are arranged for guitar alone, but others are arranged for guitar duo or quartet.

Within my album, there is a piece called La Plainte au loin du faune. It’s a piece for piano by Paul Dukas, written as a tribute to Debussy who died two years before. This work is very little known but it refers to the Prélude à l’après-midi d’un faune, the most famous orchestral piece by Debussy and which upset the history of the music within the 20th century. Paul Dukas’s work is very dark and mysterious, so two guitars and a baritone guitar were used in this arrangement. The baritone guitar sounds a fourth lower than the standard guitar. It added depth to the arrangement, and I’m very proud of the result.

There is a very popular technique on the classical guitar: the tremolo. It is a right hand technique that consists of alternating very quickly and regularly the four fingers of the right hand in the following order: thumb, ring finger, middle finger and index finger. The thumb takes care of the bass line while the other fingers sing the melody. This technique gives the illusion of a continuous melody, like that produced by the bow of a violin or a voice. It is one of my favourite techniques on the guitar, and with practice, it can be done without thinking and without effort. I propose you to discover the tremolo through an arrangement I made of a song of Schumann entitled Ich Grolle Nicht, which means “I bear no grudge”.

I love walking randomly in the streets of Paris. I walk alone and lose myself in the crowd of passers-by, in the middle of the noise of the cars and the discussions of the terrace.

It is important when one is a performer to assert one’s personality through one’s own choice of repertoire. I try to assert my singularity by choosing pieces in agreement with my own sensitivity, but also by choosing works that are not often played or are unpublished. In my album “Hommage à Debussy“, there are many unpublished transcriptions such as the Arabesque, the Doctor Gradus ad Parnassum, or the Plainte au loin du Faune by Paul Dukas. There are also works for guitar that are rarely played, such as Georges Migot’s work in three movements or Philippe Lemaigre’s Prelude. All these arrangements are available on my website, both on standard staff and in tablature.

The classical guitar is an intimate instrument, which does not have very good sound projection. I like to play in places that allow me to forget this inconvenience. Churches, with their high ceilings, often have excellent natural acoustics for the guitar, and I love playing in them for this reason. You can have a wider sound palette and play very piano without fear of not being heard. The playing is therefore more subtle and delicate. It’s perfect to play Debussy’s music for example!

Classical music is sometimes considered too elitist and closed, but musicians of my generation are increasingly trying to break down the barriers between the different worlds. It is not uncommon to see classical guitarists trying their hand at jazz or electric guitar. Antoine Boyer and Samuelito are two models in this field. I love their approach because it allows the guitar to reach a wider audience.

I participated for two years in a row in a classical music festival that took place outdoors in the Montmartre Arena in Paris, in front of the Sacré-Coeur. Each concert was magical: we were about ten musicians on stage as well as lyric singers, and we played great works of the opera and classical music repertoire. The night fell gradually on Paris and garlands illuminated the stage. The arena was always full and dozens of passers-by would gather behind the gates to listen and watch. I remember learning the second movement of the Aranjuez Concerto in a few days and it was an incredible experience to play it with a chamber orchestra in such a magical place.

I suggest you watch this video of the opening of the festival, in 2018. The guitar was alone, then the orchestra joined me on stage.

For me, success is to be able to regularly propose new projects while mobilizing a large audience around you each time. I am lucky to be supported by a large community on YouTube, and this is also what encouraged me to make this first album “Hommage à Debussy“.

I have been teaching guitar for a number of years, and I try to instil in my students the ability of autonomy, curiosity, but also rigor and regularity in their work. These are essential notions for each musician.

My guitar! It is brand new, and was made by the Italian luthier Fernando Mazza. I recorded my whole album “Hommage à Debussy” with it.

She first studied business in the prestigious school of HEC Paris. After four years, she decided to give up this carreer and to entirely dedicate herself to the guitar.

She took classes with Jérémy Jouve during four years at the Conservatoire of Aulnay-sous-Bois and next with Gérard Abiton at the Pôle Supérieur of Paris.