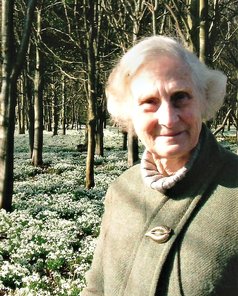 My parents were both very much interested in the arts, my mother especially in music. She had trained in Geneva under Emile Jacques Dalcroze, and I took part in her eurhythmic classes from an early age. I began piano lessons at six, composed potty little piano pieces, and doted on a solo anthem she composed, which I sang while she played, along with many folksongs. I must have said that I wanted to compose; Adam Carse advised her to arrange violin lessons to improve my ear. All five children in the family played an instrument, so I took a turn at some piano parts in ensembles. University courses in music appealed to me more than a music academy, so I landed up at Durham University, under Professor A J B Hutchings, whose lectures on music history were inspiring. I don’t remember any composition lessons per se, but there was time and the impetus to compose and submit a string quartet movement as part of my finals. Somehow I became aware that whether we use words or not, it’s important to feel that we really have something to say. On leaving Durham I went to London, taught piano, gave adult classes in music appreciation, and took lessons in lute and singing – an enthusiasm which had developed at Durham. There was little room for composition then or when I got married, moved to the country, raised three children and became a singing teacher, so composition took a back seat until the 1980s…

I wasn’t aware of frustration at not finding time to compose. Writing poetry filled in the long gap, in which I was soaking up the song repertoire while teaching singing, and gradually acquiring the confidence to get together a team suitable for producing Handel’s Theodora, which had greatly impressed me when I studied it with a WEA class. After that, wanting to write a concise opera for younger pupils followed, and by the time I had used spare time over six years to research and craft the libretto, I had certainly built up a head of steam. The result was Letter to Philemon (an opera about St Paul in captivity, drawing on early conversations with my grandfather during weekends out from my own captivity at boarding school), which began a new period of composition.

The most significant influences have been Fauré (for his harmonic suppleness), Britten (for his powers of evocation and empathy), and Bartok (studying his compositional processes at Durham stimulated an interest in his lively variations of time signature and the elasticity of musical motifs). But ‘the Greats’ preside over it all.

What are the special challenges/pleasures of working on a commissioned piece, or working with particular musicians, singers, ensembles and orchestras?

The pleasures are in meeting and working together with the performers, and helping them to appreciate the characteristics of the music. The frustrations are when funding doesn’t allow enough rehearsal time for professionals to feel happy about recording the last rehearsal or performance (this happened with the Two Shakespeare Sonnets, when Ian Partridge wouldn’t allow us to record what turned out to be a lovely performance, so no recording exists. I understood his reasons, but wished I had disobeyed!). Because students and amateurs have more time to rehearse and think about their parts, they can produce stunning and sincere (if imperfect) performances. Philemon was a case in point, and I remember well taking part in Stravinsky’s Rake’s Progress in Tours with an international cast of Musica Viva students, whose spirited performances put Glyndebourne’s production that year to shame.

‘Letter to Philemon’ – the opera was a sizeable undertaking with which to begin the serious years of composition, but it fired the performers and moved the audiences, whose responses afterwards were memorable.

‘Nocturnal Scherzo’ – the Brindisi Quartet led by Jacqueline Shave gave it a vigorous performance. During the composition I realised that one should not define music as either abstract or programmatic. I set out to compose something abstract; when I got stuck, I realised what it was about, and that helped me to drive forward and integrate it.

‘Sonata for 4 Hands: Airs of the Seasons’ – perhaps it was more fun than the rest. In particular I used ‘Autumn’ to bring back transformations of the other seasons’ themes in reverse order, as if looking back with nostalgia, the way one does as winter returns – that made it a meaningful Rondo.

What are your most memorable concert experiences?

In the audience, Ravel’s Daphnis and Chloe, with Chloe danced by Margot Fonteyn.

As a performer, several experiences stand out:

Singing in the chorus of The Rake’s Progress in Tours

With the Icknield Singers, one voice to a part, Taverner’s Dum Transisset Sabbatum at Easter, and Fayrfax’s Magnificat

Love composition enough to want to do it whether you get paid or not. Have friends or pupils who are happy to perform it. Value and reflect on your life experiences, whether happy or painful, because whether music appears to be programmatic or abstract, it is all the product of experiences that are deeply felt, as much as of individual gifts.

Beyond that, considering this question has made me realise that I would be interested in giving a series of interactive lectures with students, so this is work in progress, which I hope to develop… Subjects I would like to explore are Contrasts, Transformations, Abstract or Programmatic?, Structures, Colours, and Unity & Variety in composition.

These things shall be by Ailsa Dixon received its world premiere by the London Oriana Choir at the Cutty Sark, Greenwich on 5 July 2017, as part of the Five15 project giving a voice to women composers across the UK. More here, including a video of the performance

More about Ailsa Dixon, her life and music on her website

Born in 1932, Ailsa Dixon began composing before reading music at Durham University, and later studied with Paul Patterson, Professor of Composition at the Royal Academy of Music.
​
Her works include a two-act opera, several pieces for string quartet, songs, chamber music and instrumental works including a sonata for piano duet.

Her compositions have been performed by the Brindisi Quartet, Ian Partridge and Lynne Dawson among others.

​In July 2017 her anthem for choir, ‘These Things Shall Be’, was premiered by the London Oriana Choir at the Cutty Sark in London, as part of the Five15 project promoting work by women composers.

​ Ailsa died in August 2017.  A tribute to her life and music formed part of a remembrance concert by the London Oriana Choir in November, together with a performance of ‘These Things Shall Be’.   With the sonata for piano duet  currently in rehearsal, her music lives on.