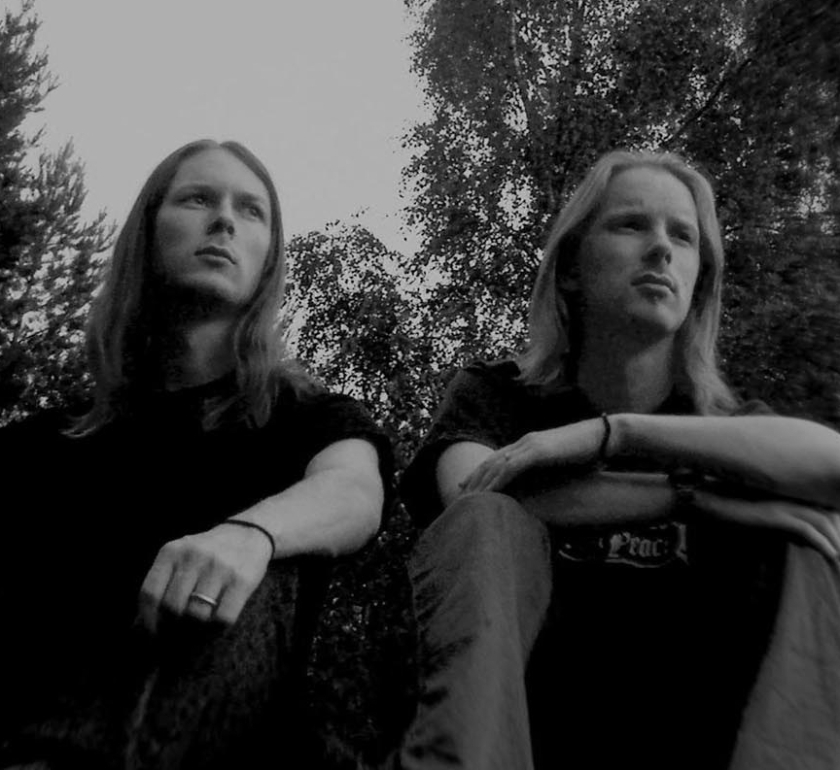 Mikael: We were raised in a musical home, and so music became an integral part of our lives from very early on. Mom would play music on her record player from the early morning and throughout the day, and I’m thankful for the way she exposed me to such a wide variety of music, as I feel it’s given me a head start, in different ways, later on. Grandpa was the biggest inspiration for both of us. He used to sing in the Swedish male voice choir Orphei Drängar, and he was brilliant in playing the saw. It’s impossible to overestimate his influence on both of us.

Grandma was a cantor and she had an upright piano that me and Daniel began plinking on before we even knew how to walk. Grandpa’s grand piano would serve us in the same way. I guess it wasn’t the sweetest of music right from the start, but to be given that opportunity – to experiment with sound, registers, dynamics, and so on – starting from where you’re nothing but a toddler, has helped shaped my musical understanding tremendously.

Daniel: So, music became a natural form of expression for us from very early on. Just like spoken language, albeit with music you could many times express things that words just couldn’t.

Who or what were the most significant influences on your musical life and career?

D: We grew up in the 1980s and 90s in a home full of all kinds of music. An eclectic mix of the classical and orchestral masters, jazz, pop, rock and folk. Apart from all that, nature is the great inspiration that influences our music. Our humble dad is an avid bird-watcher, and ever since our growing up he brought us land and kingdom around. We learned to appreciate and realize the beauty of nature.

D: Hard to say. Challenges are a natural part of everything, of life itself. They might be small and not bother you too much, or completely possess you and drain you. But in the end, they’re there to be overcome, and in doing so, you’ll emerge stronger and an experience richer.

It’s absolutely crucial to be able to identify a challenge as it arises. Don’t let frustration get to you, as it’ll put you in a mindset where you may find it hard to find pleasure and joy in your work, but keep your head calm.

I’d say me and my brother constitutesa pretty solid problem-solving unit. That, and we also tackle setbacks and negativity rather good. I’d say we find strength and comfort in each other.

M: If I were to mention a challenge that has always plagued me and my brother, it’s that we’re constantly in a battle against the clock. We’re both quite slow and finicky when it comes to work, so working on a schedule or towards a deadline is something that we find ourselves struggling with. This is true in all creative stages: writing, arranging, recording… You might say we live in an unfortunate time, as the world of today is plagued by a very short attention-span, demanding quick or immediate deliveries. But herein lies a challenge for us, and we’ve learned to accept it and find different strategies to make it work.

What are the special challenges/pleasures of working on a commissioned piece and working with particular musicians, singers, ensembles and orchestras?

D; Oh, it is a pleasure, alright! I guess it’s about getting that idea from out of your head, and to realize it in the room.

In the past, we’ve mainly worked by the motto “DIY” [do it yourself], which might be attributed in part to our very controlling and pedantic personas. It can be hard to let go of the control. And this relates to the previous question, in that it has been a great challenge to overcome, but in doing so we’ve learned that working with other people can be a wonderful thing. It might give you new ideas – ideas that you never would’ve had otherwise.

D: Difficult to say; our pieces have so many different strengths and characters among them. But I have a saying, in that the one we’re most proud of, is the one that hasn’t yet been written.

M: Personally, I’m nigh unable to enjoy anything of what I’ve done. I just can’t keep from thinking about ways in which it could have been improved, or ways in which it should have been different. It’s a kind of a curse, you might say, but at the same time, I think it’s a detrimental thing to look at your catalogue and feel contempt. Sure, it would be a wonderful thing to feel proud about a piece, but you must never stop improving, taking it to the next step.

M: Our musical styles are an effect of the wide diversity of musical influences we’ve had; they are indeed quite plentiful, and we think that should be obvious listening to our music. But we always strive to strike a balance, where there’s a certain amenity in the mix of styles, genres and influences.

D: I like to think about our music as “eclectic”, and always moving between different genres and styles such as Classical, Jazz and Popular music.

D: We usually throw ideas between each other. It is a great help that we know each other inside and out. We outline the ideas, we put down the notes, we arrange; some ideas we’ll reject, while others we’ll take further. We write small info sheets with lots of nerdy information, evaluate, record, and so on. It’s a great machinery!

M: It starts off with an idea. It can be a single phrase, a bass line or a chord progression. You write it down, and then the composing starts. When you have a good original material, this generally flows as if automatic. Then comes the arrangement, and here is where the time is being consumed.

Who are your favourite composers and musicians?

As composers and musicians, what is your definition of success?

M: If we mainly start from ourselves then it is a success to be able to express ourselves again and again, to be able to shape something as abstract as a feeling or a state of mind. But also, success is emphasized when others appreciate what you do …

What do you consider to be the most important ideas and concepts to impart to aspiring composers and musicians?

M: The music industry can be disheartening to face backlash after backlash. It’s a tough industry, for sure. But, I believe that as long as you have stories longing to be told; feelings to communicate, then there is an audience for your art. Trying to appeal to each and everyone is a path that’ll ultimately and inevitably fail.

D: To write for yourself and not for others. The music you’re making should first and foremost be for you. It’s best when it’s genuine, coming straight from the heart without middlemen.

Daniel and Mikael Tjernberg started to write music together at an early age. The music soon became distinguished in its style, with the brothers blending different musical genres, such as orchestral classical, jazz and ambient, and making them interact in a musical context with a very personal musical mark. They became recording artists, writing for album releases as well as for film/TV and other medias.