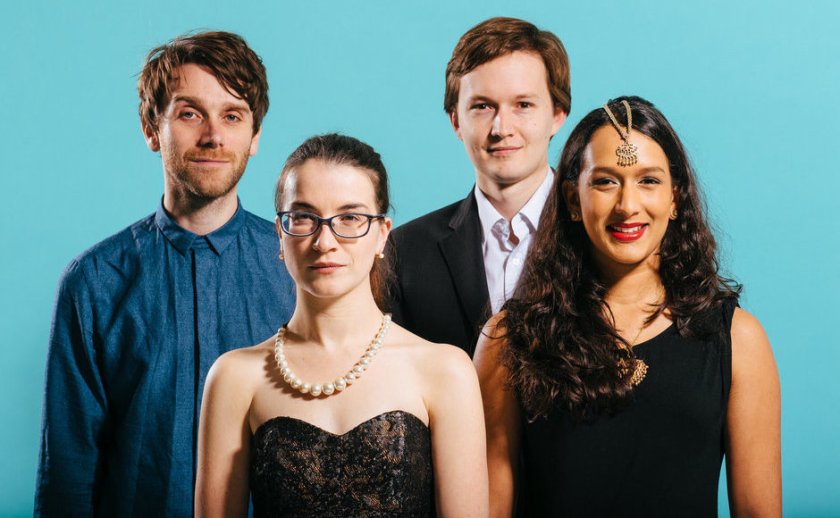 We have all found our way to music, and professional music, from different angles. We’re lucky to have found each other…there aren’t that many people in the world who want to dedicate all of their time to playing modern and contemporary music for string quartet!

We received coaching from various chamber musicians as part of the European Chamber Music Academy; the founder Hatto Beyerle and the pianist Ferenc Rados were particularly memorable. We’ve also been lucky to have spent some time with the Kronos Quartet who are immensely inspiring, musically and professionally.

Any grant applications: it’s already a challenge to write them while trying to focus on a performing schedule, and then you never know if you will be accepted or rejected. Musically, any string quartet finds tuning the greatest challenge, to play in tune we have to listen in the same way, think alike, listen alike, and even be in the same mood – it’s what we practise the most.

Our first Songbooks album of music by Christian Mason is currently deep in the mixing stage. It has been years in the making and we think it will be totally worth it.

Ligeti’s two quartets from the mid 20th century are at the core of what we play as a group – they are both very different and represent a lot of the musical styles and concepts found in the modern string quartet.

Most of our discussions are about choosing concert programmes. We are lucky that we usually can choose to play our favourite music at the time, but there are limits. We have to make sure our concerts aren’t too long, they have to suit the audience and the venue, and we have to ensure we have enough time to prepare every programme. We like to play new music, so we naturally can’t play the same things very often, but a lot of music also needs to be played more than once. The premiere usually isn’t the best performance after all.

Union Chapel in London – it has such a unique atmosphere and when we play there we feel like we’re close to the audience.

It wasn’t exactly a concert but in 2015 we performed as part of a Greenpeace protest in front of Shell’s London headquarters, standing on iceberg sculptures next to Aurora, Greenpeace’s giant polar bear.

One thing we love about playing modern and new music is the range of experiences that the music can offer: some pieces demand an emotional response, some are more experimental or Zen, some are purely intellectual, and some are connected to the wider world (including nature, science, history, and politics). We believe we have succeeded if we can communicate some of that experience to the audience.

The world of music is very big, there are so many things that you can listen to or play, that there is no single pathway to becoming a musician.

The ​Ligeti ​Quartet ​have ​been ​at ​the ​forefront ​of ​modern ​and ​contemporary ​music since ​their ​formation ​in ​2010. ​They ​have ​established ​a ​reputation ​as ​one ​of ​the ​UK’s leading ​ensembles, ​breaking ​new ​ground ​through ​innovative ​programming ​and championing ​of ​today’s ​most ​exciting ​composers ​and ​artists.