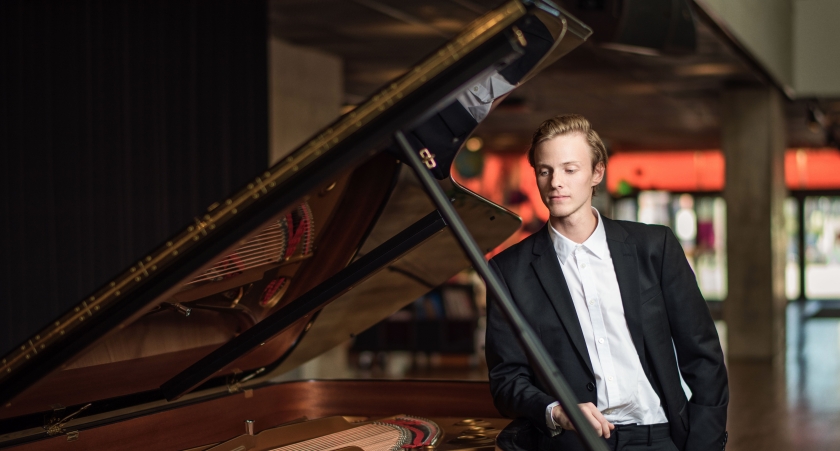 Since I was born into a musical family, I had the fantastic privilege to encounter classical music from a very early stage of my life. Music was always played in the house and hearing my mom teaching piano students was the first great inspiration and influence for me to start playing the piano. Throughout my musical career I have been immensely lucky to have met incredible artists and pedagogues which in the end are all key factors to who I am today as a pianist and musician.

Pursuing a career in music is a never-ending process of development and comes with a lot of challenges and struggles. One of the greater challenges in my career has been to find enough possibilities to play concerts – especially during the times of the pandemic. In terms of pianistic challenges, I’m still yet to find my own voice on stage and fully understand what kind of musician I would like to end up being. It’s important to remember that even though being a musician comes with a lot of struggles, the joy and happiness it gives to share music with people is inevitable.

I do have a few performances and recordings I’m happy and proud of. Recently I was participating in the first round of The Leeds International Piano Competition and I was quite happy about my recording – although in general when are we ever really satisfied with our performances? I have also some great memories from a few performances I did in Denmark which was connected to Poland celebrating a 100th anniversary of regaining its Independence in 2018.

Some of the closest composers to my heart are Chopin, Schubert and Rachmaninoff. In my last couple of years, I have been obsessed with the last Schubert Sonatas and specially his Sonata No. 18 in G major I have performed with great success. All my life I have been performing Chopin’s music – as I’m born into a polish family – and I have good connection with his Mazurkas, Nocturnes and Waltzes. I would say generally I feel well performing romantic repertoire.

I listen a lot to classical music off stage. Not only piano music but also big symphonies like those by Tchaikovsky and Mahler. I’m also very lucky to live in a beautiful place in Sweden called Arvika, which is surrounded by lakes, forests and even small mountains. Taking a walk outside while listening to music is something that gives me inspiration and new ideas on stage. Being an Artist in Residence at the Ingesund Piano Center is also a valuable inspiration for me, because I’m surrounded by some of the best pianists and musicians in the world.

My repertoire choice is connected to many things. One is if I’m participating in a competition and some special requirements are put for the repertoire that I must follow. If that’s the case I try to connect the obligatory pieces with something that fits with the rest of the programme. I like to have structure in my recital programmes but in the end, I also choose repertoire that I simply love and speaks to me. I’m always open for new choices and possibilities but I tend to play more romantic/post-romantic music because I feel more comfortable with it.

I actually don’t have any particular venue I like to perform in. As long as there are some good acoustics and the piano is decent I’m more than satisfied. I do like performing in churches because it somehow gives a whole new spiritual atmosphere into the pieces you play and often the acoustics are very interesting.

What do you feel needs to be done to grow classical music’s audiences/listeners?

I think the most memorable concert experience is from my Steinway Hall debut in London in 2018. I was playing Chopin’s monumental 3rd Piano Sonata, and in the 3rd movement I started having tears on stage while playing. The feeling was a mixture of happiness and sadness in the same time – a feeling that is hard to explain for me but the music simply spoke to my deepest emotions.

Success can be defined in so many different ways. Normally we associate success with money and fame, but I think as a musician you strive to become the best version of yourself. Success for me would be to achieve the best version of myself on stage while playing. Of course I would like to play as many concerts as possible, but I think if you reach the maximum of your capabilities as a pianist, the concerts will come more easily to you. I think success for me would be to give joy and happiness with my music – that would be my ultimate goal.

I think it’s important to ask yourself at every stage: why are you doing what you are doing and never lose sight of why you fell in love with music in the first place. The joy to be found in music is far bigger than any career and even though you don’t end up being a professional musician, that won’t detract from your ability to enjoy all the treasures that music has to offer.