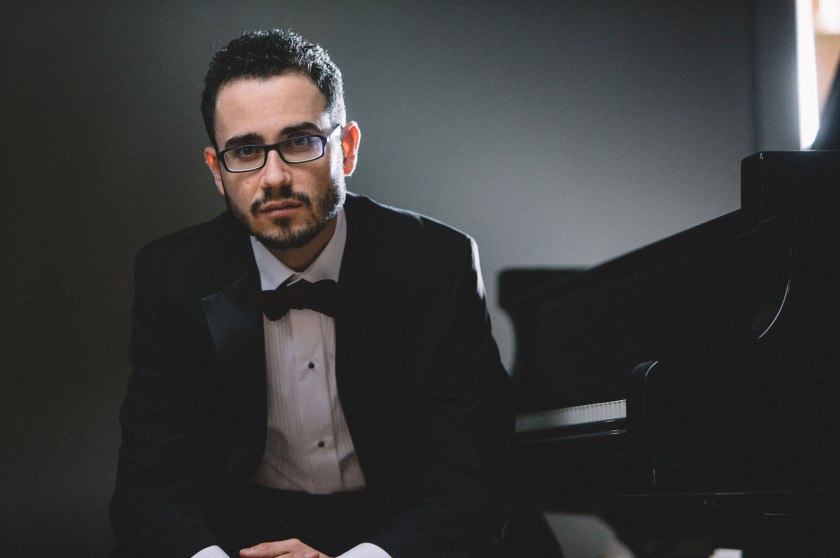 My dad, as an amateur musician, after a year abroad, decided to buy a new piano for the house, and my parents really thought it was important to make the best use of it: that’s why l started taking piano lessons!

My teachers also had a great role in my decision to pursue a career in classical music: their trust, their advice, their words were really important for me.

Besides my teachers, to whom l am always really thankful, my biggest influences can be found in the composers and musicians. It was a slow process, but when you realise that being a musician allows you to deal, every day, with such masterpieces of the human kind, well, that’s for sure a big influence and motivation!

Among them: J.S. Bach (and Glenn Gould): l still remember as a child, how mesmerized I was by Glenn Gould’s approach of Bach and the beauty and emotion l was getting from the music. Glenn Gould’s integrity is still a great influence and a source of inspiration.

Mozart and Schumann are two men who really had something to teach and tell us all about being human.

To play Rachmaninov 3 in 3 months notice, that was a real challenge!!

Of course, there are many challenges in being a musician, and part of that is the excitement of being on stage. Certainly, one of the greatest is to be always on top of everything: no matter what is happening in your life, or the workload you have been charged with, your audience always deserves the best treatment possible, and that’s why l think that sincerity is the most important quality of an artist.

Hard to say, since every performance is flawed to me!

But I am very proud of the performance of Thomas Adès’ ‘Traced Overhead’ l gave at Wigmore Hall in January: one of the most challenging pieces l have ever played, it was a real mind-puzzle!

I think Schumann’s piano music is the closest to me, and l find it particularly pleasing to play: for his writing, his structure, and his emotional character. Also, the research into the score, analysing Schumann’s signs, is really appealing and mind-pleasing for me.

Every season l try to balance my personal choices and attitudes with what the audience may enjoy the most, depending on the venue and the country.

I always try to develop a theme, or a red line, and see how it is developed in different ways and manners throughout the centuries, from the early baroque to today.

As a Milanese, of course it is La Scala! It was very special to play there!

Many and for many different reasons. Among pianists, definitely Mikhail Pletnev: he is able to do what he wants, at any time, and that’s a gift (also for us). Thomas Adès, for his versatility and ability to be so many roles at the same time. From the past, Richter, Cortot, Rachmaninov.

For many reasons, the concert debut at La Scala: it was a life-changing moment, and that was the end of a phase. It was really quite emotional.

The success, to me, is to disappear as an interpreter

Of course this is a very extreme way to say it, but my goal is always to respect and bring back to life the composer’s will. As Flaubert said about literature, the key is when the interpreter lets the composer and his music conquer the scene. Music, as a language, should be the vehicle of a message the composer left us. I can’t stand performances which are personal and narcissist showcases!

Besides the obvious advice – be consistent, practice a lot, be steady – l would say to always be curious: curious of life, of arts, of science, of the world. To be inspired by anything that can nurture your imagination. It is not only the musical and technical skill that matters, but it is also the depth of your message that can touch the audience.

Since winning the 2015 Honens International Piano Competition, Luca Buratto blazed onto the world stage with a reception of which most musicians only dream. His successful debut recitals at Wigmore and Carnegie Halls heralded the Italian pianist as “a name to watch” (The Guardian) and “no ordinary virtuoso“ (The Telegraph). Critics and audiences across the globe are quickly recognizing Buratto as a distinctive performer. Described by International Piano Magazine as “masterly,” his highly regarded interpretations of prolific British composer Thomas Adès reveal Buratto’s versatility as “an artist who is both illuminating and unafraid” (ConcertoNet).

In March 2018, Buratto made his recital debut at Konzerthaus Berlin followed by a performance of Prokofiev’s Piano Concerto No. 2 with the London Philharmonic Orchestra conducted by Thomas Søndergård at Royal Festival Hall in April.

Buratto’s incisive interpretations of Robert Schumann have earned him particular praise. In a review of his 2017 CD release Schumann: Davidsbündlertänze, Humoreske & Blumenstück (Hyperion Records), Alex Baran from Wholenote Toronto said: “Buratto plays with such a conviction that you immediately know he is certain he has revealed Robert Schumann’s true voice. It’s a deep connection that he sustains effortlessly through the entire recording. Hear him live if you can.”

Following graduation from the Milan Conservatory in 2010, Buratto earned a Masters degree from the Bolzano Conservatory. As a Theo Lieven Scholar at the Conservatorio della Svizzera Italiana (Lugano) under the guidance of William Grant Naborè, he also received a Masters of Advanced Studies. Buratto’s competition successes also include Third prize and Audience prize in the 2012 International Robert Schumann Competition. His teachers include Davide Cabassi and Edda Ponti.