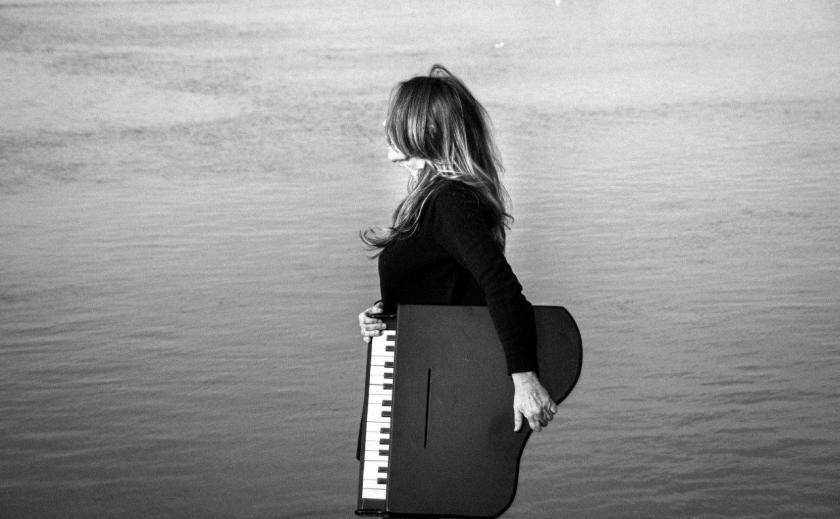 Since my older brother played the violin,  it was decided that I should play the piano. It was not love at first sight, but rather a gradual mutual acquaintance. My instrument slowly opened to me as I also opened to it. The more time I spent with it, the greater the magic that filled that time. When I realised and felt that the piano was not only awakening my emotions, but could also receive and transmit them, practicing the piano became a great pleasure for me. I also loved to appear before the audience because it gave a new, important and necessary dimension to my working process, which is usually done in solitude. So, through my exercise and performance, my profession was determined quite naturally.

I am certain that John Cage, a creative genius, had the biggest influence on my musical life, but also on me outside of the music. His creative output, his thinking, wisdom, openness and tolerance were my greatest teachers and authorities. I moved away from the classical repertoire and my career was filled with a search for new, different sounds, expressions, forms, “sound explorations”. And so I almost completely devoted myself to playing modern music.

Perhaps the decision to prepare the entire Schoenberg’s piano opus immediately after graduating in piano and go to the International Arnold Schoenberg Piano Competition in Rotterdam. It was the first time that I had to prepare the programme completely by myself and make musical decisions based on my intuition and thinking, yet not knowing if they were the right ones. In our profession it is important to have the courage, but also willingness to take risks. I do not know if it was even more challenging to prepare the composition Evryali by Iannis Xenakis in a very short time, because the pianist whom was offered to play that piece cancelled. The work is terribly complex and demanding, written non-pianistically, but great! I was supposed to perform it at The Music Biennale Zagreb. When I saw the satisfied look on Iannis’ face, I was very happy. Of course, there were numerous other challenges…

That would be my last project in which I have invested almost three years of really intensive work: BREATHING IN / BREATHING OUT: A Little Anthology of Piano Music (1914- 2014), a series of three compact discs (more than 3 hours of music ) with works by 25 composers written for piano, prepared piano, toy piano, music box, soundtracks, electronics and two pianos tuned a quarter -tone apart. I found almost all the pieces in this release in 2014, made a collection, recorded and produced it. I was also a music producer named Madame Cage (ha, ha). With the help of the musicologist Ivana Miladinović Prica, I succeeded in fulfilling the plan that the audio edition should be accompanied by a booklet containing, among other things, numerous compositors’ texts written for the Little Anthology.

It would be easier for me to answer which pieces I play the worst! Those are certainly the scores that I do not understand, that are just incompatible with me. They are no longer in the programme.

I do not know what I play best. But, I would like to answer the question of what works give me the most pleasure while I play them. Although that also changes. So, I’m constantly bouncing from one programme to the next.

Somehow, almost as a rule, the programme starts to form around a composition that I have not previously played. It possesses the magnetism to “attract” others and to help me quickly explore and find the rest of the program. The formation of the programme is a beautiful and creative process, full of surprises. It stops when I complete the programme. I love well rounded programmes, which are like a theater performance in one act. It is not always possible to achieve this.

There is so much music. I do not know which unit can measure its quantity. I am not sure it is a measure for time. It is not possible to find out about all the music that exists. Music is immeasurable, often hidden. Like the cosmos.

I loved playing the Synagogue in Novi Sad. The room with magical acoustics is at Accademi Santa Cecilia in Rome. The concert in that hall was an unforgettable experience. Any idea could have come true. In Montreal, La Chapelle’s history of the Bon-Paste has an outstanding example of the Fazioli piano. A real jewel. I like to play at Kolarac Hall in Belgrade.

It was a concert entitled Image de Moreau, taken from the eponymous composition of the Dutch composer Louis Andriessen, that I played in the Synagogue in Novi Sad. Something happened there, for me it was very special. The concert was released on a CD.

First we must have some goal in dealing with music and its fulfillment will be a success for us. The measure of success is different for everyone, as well as goals.

Find the right place for every tone.

Be strict with yourself.

Talk to music, paint with music.

Learn from the best!

The score you play needs to become YOU!

Everyday life brings many moments that we could call perfect happiness: when you are happily in love, when your work is rewarded, when you travel wherever you want, when you are swimming in a beautiful warm blue sea surrounded by sounds and scenes of the nature… But later I understood that this feeling of happiness is not complete, it is not perfect. It was the result of realizing my wishes. Perfect happiness is when you are just happy, happy for no special reason. I experienced this feeling for the first time after five-day retreats that were completely maintained in silence and many hours of meditations. The very thought of that state makes me happy.

Nada Kolundzija is an internationally renowned concert pianist and Serbia’s most prominent performer and passionate promoter of contemporary music. Nada Kolundžija has given over 1000 concerts in 28 European countries and all over the world (USA, Canada, Mexico, China, India, Thailand). She won national and international awards and was nominates for awards for her recognition for her artistic achievements in contemporary music.

Kolundžija premiered a vast number of compositions by Serbian and foreign composers. For many years she introduced Belgrade audiences with the works of the 20th century “classics” and expanded her repertoire with works by Serbian composers, many of whom dedicated their works to her. Her soloist recitals are distinguished by imaginative programmes and highly praised interpretations.

Her concert appearances and recordings are sometimes marked by her performance of toy piano, prepared piano, music boxes, soundtracks, live electronics, two pianos tuned quarter tone apart. She has developed large and small performances around unusual multimedia concepts, and has collaborated with other leading artists.

In addition to her career as a solo performer, Ms. Kolundzija frequently performs with her brother, world-renowned violinist, Jovan Kolundzija. She was a long-term standing collaborator of the Toronto-based ensemble Les AMIS. Throughout the 1970s and 1980s she was a member of the Belgrade Ensemble for the Other New Music.

Simultaneously with her artistic career, she has taught at the Faculty of Music in Belgrade (1981–2015). She has inspired many young musicians to start performing contemporary music and for many years she has organized annual concerts with her students. She has been the Artistic director of Jovan Kolundžija’s Centre of Fine Arts “Guarnerius” since its inception in 2001.

Her enthusiasm for new music includes championing creative experiment in musical expression extending far beyond piano repertoire. In 2008, she initiated and organized the first “International Festival of Electronic Polymedia Art, Electroacoustic and Radiophonic Music” in Belgrade, ART OF SOUNDS, which presented more then forty works of composers from Europe, Australia, Canada, USA and Asia.

Ms. Kolundzija (Belgrade, b. 1952) has been playing and exploring contemporary music for more than four decades. She studied piano with Ružica Radenković at Music School “Josip Slavenski” in Belgrade. Then she obtained a BA in piano performance under Professor Dusan Trbojevic at the Music Academy in Belgrade (1975), and then specialised with Zoltan Kocics at the Music Academy “Ferenz Liszt” in Budapest (1977). She attended a master class of Sandor Falvai in Pecsui (Hugnary, 1977).