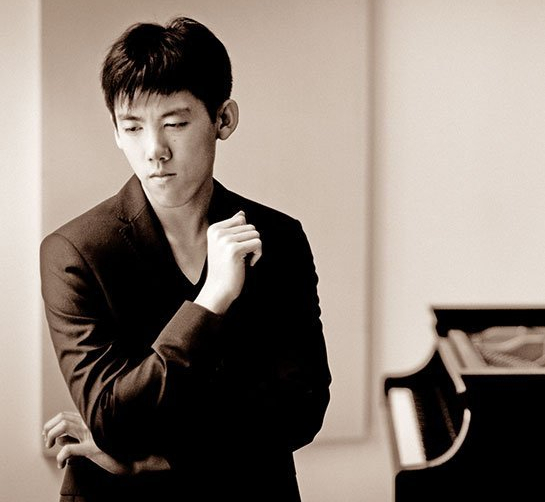 I would say that there is no single influence in my musical life which I would regard as the most important. I always learn so much from my teachers and friends whose personalities and ideas are vastly different from one another. I have also been fascinated by different forms of arts which in their own ways have inspired my feeling in music. There are simply too many valuable influences to choose among them a “most important” one.

I could never say I am “proud” of my own performances, as I am never fully content artistically. The greatest aspiration for me is always the feeling of falling short of your ideals.

I can’t subjectively judge what I can play the “best”- that should be left for the audience to say. But for me the works to which I feel the closest are those which contain a reflective or introspective nature, particularly the late works of Beethoven, Brahms, Schubert and Schumann.

I always bring a variety of different styles in my program every season. However, I don’t blindly select pieces which I love, but try to find works that, although belonging to different genres, share a secret connection to one another in their musical narratives, in the hope that they can form into one unifying narrative. In the end, I do believe that all concert experiences should be in a form of a “journey”.

I have been to many incredibly beautiful halls, such as the Carnegie Hall, the Royal Albert Hall, etc., but I must say my favorite concert places are always outdoor venues. The inexplicable chemistry between music and nature has always fascinated me the most, and when it happens, gives me the most powerful and memorable experience on stage.

My favorite musicians are some pianists in the early 1900s, usually considered as the “old romantic school”, such as Alfred Cortot, Sergei Rachmaninov, Josef Hoffman, to name a few. Among the living pianists, I would say that I am most inspired by Radu Lupu’s incredibly intimate playing, especially his live recordings.

I think the most important idea for a musician is to keep growing and evolving, whether as an artist or as a person. After all, a musician’s career is a lifetime span, and music itself knows no end. To paraphrase an old Chinese idiom: “To breath until you die, is to learn until you die.”

I feel almost obliged to say that my most treasured possession is – of course – my poor hands!

Haochen Zhang’s latest disc of music by Prokofiev and Tchaikovsky is available now on the BIS label. More information

Since his gold medal win at the Thirteenth Van Cliburn International Piano Competition in 2009, Haochen Zhang has captivated audiences in the United States, Europe, and Asia with a unique combination of deep musical sensitivity, fearless imagination, and spectacular virtuosity. In 2017, Haochen received the prestigious Avery Fisher Career Grant, which recognizes talented musicians with the potential for a major career in music.

Haochen has already appeared with many of the world’s leading festivals and orchestras including the BBC Proms with Yu Long and the China Philharmonic; the Munich Philharmonic with the late Lorin Maazel in a sold-out tour in Munich and China; the Easter Festival in Moscow by special invitation of Maestro Valery Gergiev; the Sydney Symphony and David Robertson in a China tour; and the NDR Hamburg and Thomas Hengelbrock in a tour of Tokyo, Beijing, and Shanghai.